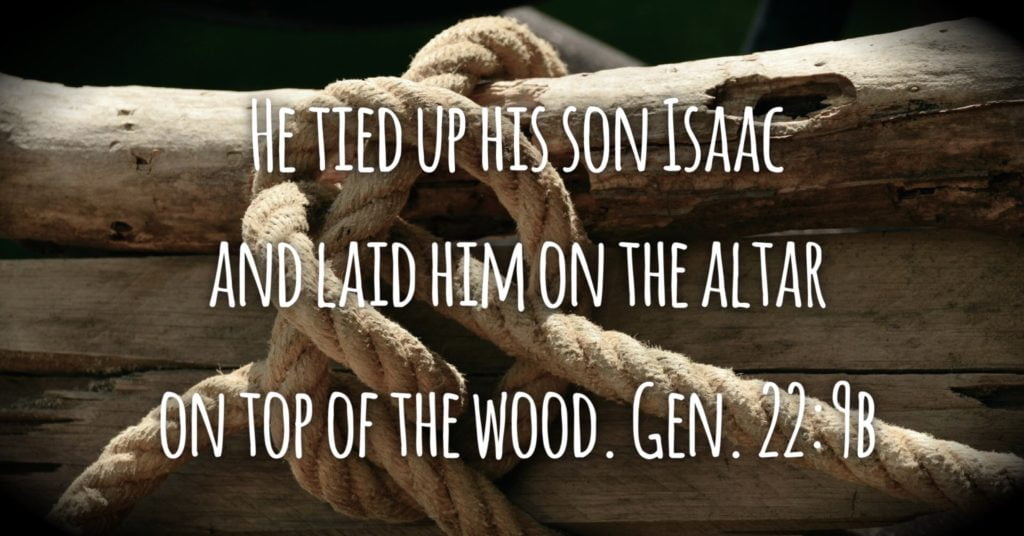 This Sunday we near the end of our sermon series from Genesis and the Revised Common Lectionary called From Chaos to Community.

If last Sunday’s scripture was difficult to reconcile, this week’s continuation of Abraham’s story is even more challenging. This week we wrestle with the difficult story that is generously – if somewhat misleadingly – known as “the binding of Isaac.” Often we approach this story looking primarily from Abraham’s perspective and affirming the depth of his faith in God. I invite you instead to read this story and focus on Isaac’s perspective.

2God said, “Take your son, your only son whom you love, Isaac, and go to the land of Moriah. Offer him up as an entirely burned offering there on one of the mountains that I will show you.” 3Abraham got up early in the morning, harnessed his donkey, and took two of his young men with him, together with his son Isaac. He split the wood for the entirely burned offering, set out, and went to the place God had described to him.

4On the third day, Abraham looked up and saw the place at a distance. 5Abraham said to his servants, “Stay here with the donkey. The boy and I will walk up there, worship, and then come back to you.”

6Abraham took the wood for the entirely burned offering and laid it on his son Isaac. He took the fire and the knife in his hand, and the two of them walked on together. 7Isaac said to his father Abraham, “My father?”

Isaac said, “Here is the fire and the wood, but where is the lamb for the entirely burned offering?”

8Abraham said, “The lamb for the entirely burned offering? God will see to it, my son.” The two of them walked on together.

9They arrived at the place God had described to him. Abraham built an altar there and arranged the wood on it. He tied up his son Isaac and laid him on the altar on top of the wood. 10Then Abraham stretched out his hand and took the knife to kill his son as a sacrifice. 11But the Lord’s messenger called out to Abraham from heaven, “Abraham? Abraham?”

12The messenger said, “Don’t stretch out your hand against the young man, and don’t do anything to him. I now know that you revere God and didn’t hold back your son, your only son, from me.” 13Abraham looked up and saw a single ram caught by its horns in the dense underbrush. Abraham went over, took the ram, and offered it as an entirely burned offering instead of his son. 14Abraham named that place “the Lord sees.” That is the reason people today say, “On this mountain the Lord is seen.”