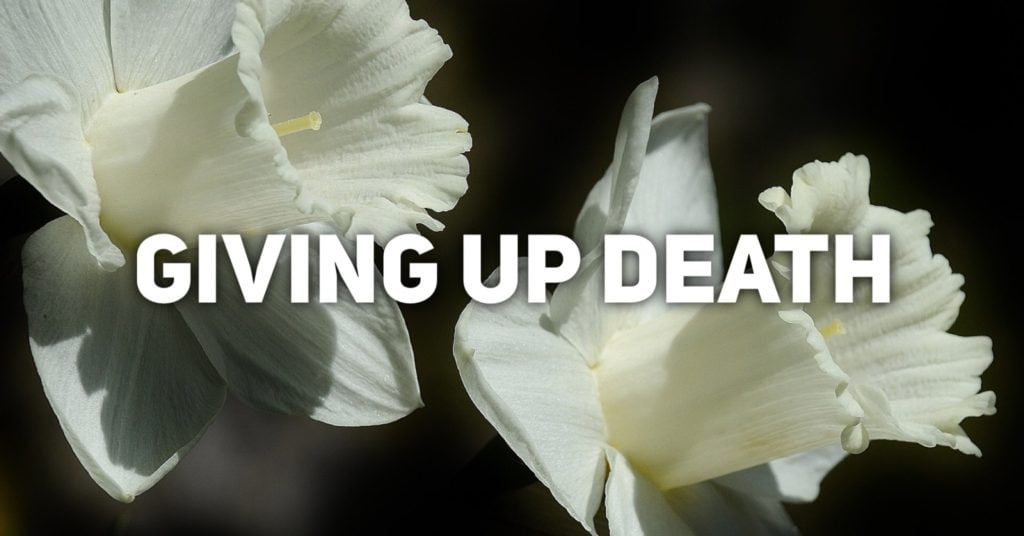 This Sunday is Easter Sunday!! We conclude our Lenten series with the reminder that Jesus’ death and resurrection mean we are no longer subject to sin and death. In this freedom, we are called to live as people who are changed by this news.

John 20:1-18
EMPTY TOMB
1Early in the morning of the first day of the week, while it was still dark, Mary Magdalene came to the tomb and saw that the stone had been taken away from the tomb. 2She ran to Simon Peter and the other disciple, the one whom Jesus loved, and said, “They have taken the Lord from the tomb, and we don’t know where they’ve put him.” 3Peter and the other disciple left to go to the tomb. 4They were running together, but the other disciple ran faster than Peter and was the first to arrive at the tomb. 5Bending down to take a look, he saw the linen cloths lying there, but he didn’t go in. 6Following him, Simon Peter entered the tomb and saw the linen cloths lying there. 7He also saw the face cloth that had been on Jesus’ head. It wasn’t with the other clothes but was folded up in its own place. 8Then the other disciple, the one who arrived at the tomb first, also went inside. He saw and believed. 9They didn’t yet understand the scripture that Jesus must rise from the dead. 10Then the disciples returned to the place where they were staying.

JESUS APPEARS TO MARY
11Mary stood outside near the tomb, crying. As she cried, she bent down to look into the tomb. 12She saw two angels dressed in white, seated where the body of Jesus had been, one at the head and one at the foot. 13The angels asked her, “Woman, why are you crying?”

She replied, “They have taken away my Lord, and I don’t know where they’ve put him.” 14As soon as she had said this, she turned around and saw Jesus standing there, but she didn’t know it was Jesus.

15Jesus said to her, “Woman, why are you crying? Who are you looking for?”

Thinking he was the gardener, she replied, “Sir, if you have carried him away, tell me where you have put him and I will get him.”

She turned and said to him in Aramaic, “Rabbouni” (which means Teacher).

17Jesus said to her, “Don’t hold on to me, for I haven’t yet gone up to my Father. Go to my brothers and sisters and tell them, ‘I’m going up to my Father and your Father, to my God and your God.’”

18Mary Magdalene left and announced to the disciples, “I’ve seen the Lord.” Then she told them what he said to her.

Acts 10:34-43
34Peter said, “I really am learning that God doesn’t show partiality to one group of people over another. 35Rather, in every nation, whoever worships him and does what is right is acceptable to him. 36This is the message of peace he sent to the Israelites by proclaiming the good news through Jesus Christ: He is Lord of all! 37You know what happened throughout Judea, beginning in Galilee after the baptism John preached. 38You know about Jesus of Nazareth, whom God anointed with the Holy Spirit and endowed with power. Jesus traveled around doing good and healing everyone oppressed by the devil because God was with him. 39We are witnesses of everything he did, both in Judea and in Jerusalem. They killed him by hanging him on a tree, 40but God raised him up on the third day and allowed him to be seen, 41not by everyone but by us. We are witnesses whom God chose beforehand, who ate and drank with him after God raised him from the dead. 42He commanded us to preach to the people and to testify that he is the one whom God appointed as judge of the living and the dead. 43All the prophets testify about him that everyone who believes in him receives forgiveness of sins through his name.”

Previous
Our Next Sermon Series: Half-Truths
Next
Authentic Resurrection