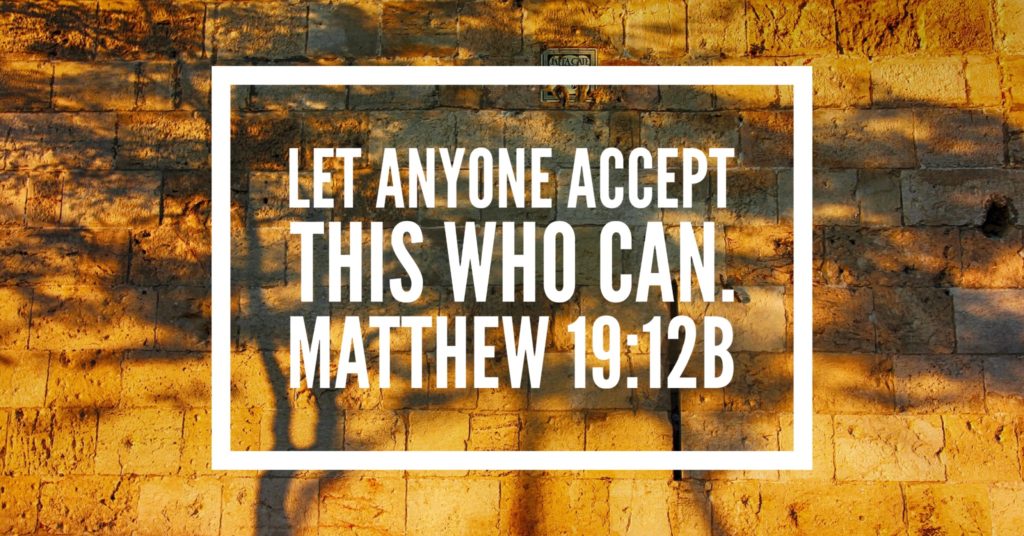 The Advent season is one of the only times in the Liturgical year when we reliably hear words from the Prophets of the Old Testament. Most often, they are words that speak of a coming Messiah. There are other messages in the prophets that are less commonly heard — sometimes referred to as a “prophetic voice.” Prophetic messages like this are, by their very nature, culturally subversive. Jesus himself is known for using the subversive formula “You have heard it said ____, but I say to you ____.” These teachings are used for the purpose of shaking us out of our old thought processes and assumptions, the ones that undermine God’s ultimate vision for humanity.

We will take a brief glance at a passage from Isaiah:

Isaiah 56:3-5
3Don’t let the immigrant who has joined with the Lord say, “The Lord will exclude me from the people.” And don’t let the eunuch say, “I’m just a dry tree.” 4The Lord says: To the eunuchs who keep my sabbaths, choose what I desire, and remain loyal to my covenant. 5In my temple and courts, I will give them a monument and a name better than sons and daughters. I will give to them an enduring name that won’t be removed.

It is clear that immigrants and eunuchs are marginalized individuals from a cursory reading of this text. Levitical law even specifies that eunuchs are not to enter the temple. But who would be considered a eunuch? Jesus gave a very controversial anecdote concerning eunuchs that he admitted not many would understand.

A gender normative understanding of a eunuch would simply be a castrated male; but that begs the question how a castrated male could be so from birth when such a designation is contrasted with those “made so by others.” If we engage these words a little deeper, we could come to understand a eunuch to be any intersex or non-gender-binary person — those born with an uncommon gender identity or sexual orientation, those who have suffered genital mutilation, or those who have chosen celibacy. By searching for a fuller understanding of “eunuch,” we see how radical and profound Isaiah’s message is when he says, “I will give them a monument and a name better than ‘sons’ and ‘daughters’.”

Is there anything else we might learn from the prophetic voices we find in the old testament? Come on Sunday to find out!

Post-Sermon update in early December
You may listen to the sermon from November 20th here:

Malachi
In follow-up, let’s examine the book of Malachi — the last book of the Christian Old Testament. The authorship of the book is anonymous. Malachi isn’t the name of a prophet. The ascribed name of “Malachi” is lifted from the first verse of chapter 3 from a Hebrew term that means “my messenger,” linguistically related to the title held by Prime Minister of Iran — “Malecki.” [ muh-LECK-ee ]

Malachi was written somewhere around 450 B.C.E. The Israelite nation had begun to return to their homeland from Babylon around 538 B.C.E. The Jews who were living in exile – the diaspora [ die-ASS-per-uh ] – had been back in Jerusalem some 100 years. Malachi is a little more challenging to shape into a singular narrative. Much of Malachi contains indictments toward various ethnicities and nations. General conceptions of God in the ancient near east centered on a tribal god. These gods only answered the prayers of their respective people groups and their power and influence were limited to their people’s geographic boundaries or political reach. We see evidence of this in 1 Samuel when the Philistines captured the ark of the covenant, thinking it would allow them to control and harness the power of the God of the Israelites. People in that time were also rarely well-travelled, and so all they knew of the world that existed was limited to the horizon.

But Malachi’s horizons were expanded in a very slight yet monumental way. Malachi reasoned among his indictments:

Isn’t there one father for all of us,
one God who created us? (Malachi 2:10a)

Malachi also noted that God might be bigger than his own line of sight:

This unnamed author of Malachi touched on something new and revolutionary about God: Malachi cracked open the door revealing that God is universal. A universal God is beyond the bounds of any religious system (or any human thought).

Jesus himself recognized the universality of God. These are his words from John (10:14-16):

14I am the good shepherd. I know my own sheep and they know me, 15just as the Father knows me and I know the Father. I give up my life for the sheep. 16I have other sheep that don’t belong to this sheep pen. I must lead them too. They will listen to my voice and there will be one flock, with one shepherd. [emphasis mine]

God speaks to us in so many countless ways; unexpectedly, surprisingly, and profoundly. Sometimes in a song on the radio, sometimes in the off-handed remarks of a friend, and sometimes in the voice of the stranger. Are there any ways that we have cut off the ongoing revelation of God? Is there any area in which we could open ourselves up to hear and learn new things about the Divine?