This Sunday’s Worship gathering brings a favorite tradition in the celebration of Pentecost. As many of us will recall, this is a time after Jesus “was lifted up and a cloud took him out of [the disciples’] sight.” as noted in Acts 1:9b. The text tells us that the disciples immediately went into Jerusalem to an upper room. They invited Matthias to join the leadership gap left unfilled by Judas, and then…

Then, they huddled in place. They sheltered. I imagine they were filled with conflicting emotions. They had seen the horror of crucifixion and the mind-blowing wonder of Jesus’ resurrection. The roller coaster of emotions must have left them exhausted.

To me, this all sounds terribly familiar. It is in this environment that the Holy Spirit came to them, inspired them, filled them, and called them anew into service.

A friend of mine is the Pastor at San Louis Obispo United Methodist Church. If there’s anyone who loves Pentecost more than I do, it’s the Rev. Rick Uhls! It is not uncommon for Pastor Rick to rent confetti cannons to loudly proclaim the arrival of the Holy Spirit, generally to some amount of surprise even to the one who triggers the report. It is not uncommon for Pastor Rick to wear his solid red suit—complete with tails and red Converse All-Stars—to worship and loudly proclaim himself Rev. Pentecost!

While I don’t quite share Pastor Rick’s enthusiasm for Pentecost (at least to his extent), I do surely share his love for Pentecost. This is the beginning of the Christian church! It begins with inspiration and creativity and joy! And it begins with its fair share of criticism. Doesn’t this also sound terribly familiar?

Friends, I invite you to join me in sheltering, in inspiration, and even in criticism. I believe that God’s inspiration is calling us into a new thing, a new thing that may seem unusual and even difficult. Even so, let us remember that following God’s true inspiration is a powerful way to engage in God’s creativity!

God is doing a new thing in us! Let Him inspire us and fill us with joy!

Acts 2:1-21 (CEB)
1When Pentecost Day arrived, they were all together in one place. 2Suddenly a sound from heaven like the howling of a fierce wind filled the entire house where they were sitting. 3They saw what seemed to be individual flames of fire alighting on each one of them. 4They were all filled with the Holy Spirit and began to speak in other languages as the Spirit enabled them to speak.

5There were pious Jews from every nation under heaven living in Jerusalem. 6When they heard this sound, a crowd gathered. They were mystified because everyone heard them speaking in their native languages. 7They were surprised and amazed, saying, “Look, aren’t all the people who are speaking Galileans, every one of them? 8How then can each of us hear them speaking in our native language? 9Parthians, Medes, and Elamites; as well as residents of Mesopotamia, Judea, and Cappadocia, Pontus and Asia, 10Phrygia and Pamphylia, Egypt and the regions of Libya bordering Cyrene; and visitors from Rome (both Jews and converts to Judaism), 11Cretans and Arabs—we hear them declaring the mighty works of God in our own languages!” 12They were all surprised and bewildered. Some asked each other, “What does this mean?” 13Others jeered at them, saying, “They’re full of new wine!”

14Peter stood with the other eleven apostles. He raised his voice and declared, “Judeans and everyone living in Jerusalem! Know this! Listen carefully to my words! 15These people aren’t drunk, as you suspect; after all, it’s only nine o’clock in the morning! 16Rather, this is what was spoken through the prophet Joel:

Sunday’s message completely differed from what I reflected on in the pre-Worship note (which I wrote the previous Sunday night). At that point, George Floyd was still alive and the protesters on television and even in our own city were not yet in the streets.

But the week changed and I had to adjust, and I suggest we all have some adjusting to do. This country changed dramatically over the course of this week. In my opinion, we should have changed a long time ago, and we still have work to do. I suggest it is Pentecost work.

I shared a number of facts including the names of four people who died at the hands of police in the Minneapolis area over the course of the last 5 years, only one of whom was prosecuted—and the officer prosecuted was black and accused of killing a white woman. While it is essential to note that each case had its own uniqueness, consider how this impacts the communities of color in Minneapolis. We named two people killed just this year: Ahmaud Arbery, shot by neighbors while jogging, and Breonna Taylor, killed by police in her own home.

We might assume this is what is being protested in streets around the country the world, but these deaths are indicators of a much larger problem. Greg Sterling, Dean of Yale Divinity School, named it well in a message to students with the reminder that another illustration of systemic racism can be found in the disproportionate numbers of persons of color affected and killed by the COVID-19 virus.

So we might support those who peacefully protest, while we condemn violence and looting. As I have said, I too condemn these acts of violence. Even in doing so, we must understand why it takes place. The Rev. Dr. Martin Luther King reminds us why this violence takes place in the speech, The Other America, delivered at Stanford University in 1967. (Note: please watch the whole speech, and for the most relevant portion watch from 23:54 to 25:40)

My confession is that I am having trouble recognizing the Spirit’s inspiration in this time. Yes, we have Pentecost work to do, and I’m struggling to find the spark, the still small voice, the strange warming of my heart.

I have seen many social media posts highlighting the tragedies of this past week, and I’ve also seen a few that remind me that the spark of hope is indeed present even though I struggle to find it. One such post from a resident of the Minneapolis area showed crowds of people gathering together to clean up the destruction from a night of protest, a shared table of food for those who would not be able to shop in destroyed stores, and smiles in the midst of diversity. 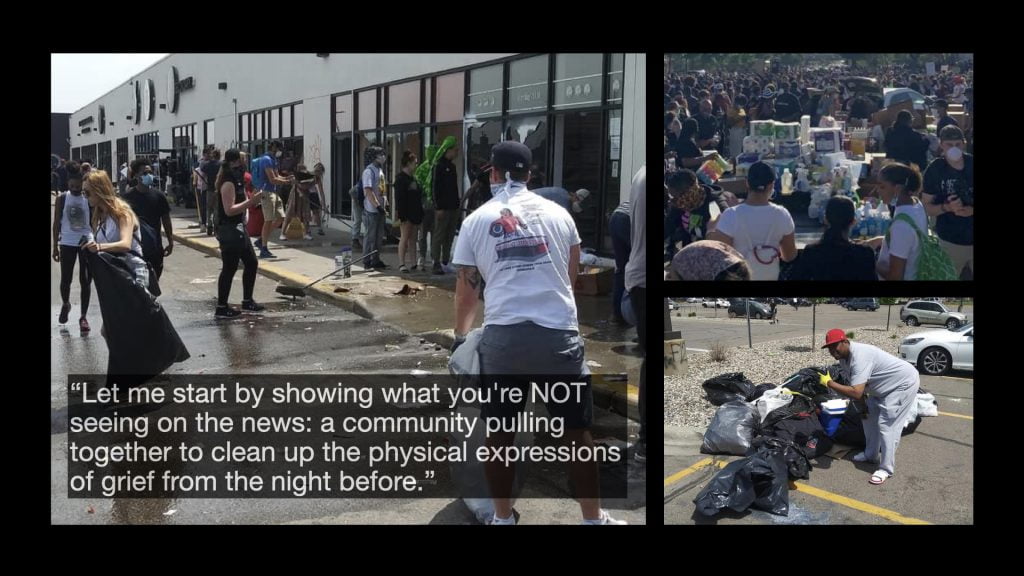 And so here may be a spark. As the camp song reminds us, it only takes a spark to get a fire going. As Mr. Rogers reminds us, “Look for the helpers.”

Many may be asking what can be done. I invite you, dear friends, to actively seek out God’s Holy Spirit. Do not hide away as the disciples did, but seek out God’s empowering spirit. Find inspiration from The King Center’s Glossary of Nonviolence, or from The Obama Foundation’s response page (note: this is not any form of political endorsement, but a sharing of resources). We must try and risk failure to discern God’s call for us!

We have Pentecost work to do. So let’s get to work!