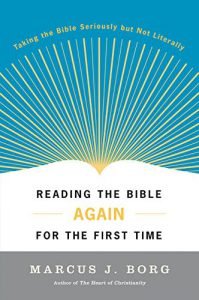 Note: This series is based on the book Reading the Bible Again For the First Time: Taking the Bible Seriously But Not Literally, by Marcus Borg.

This week’s ongoing exploration of the sacred writings that comprise our Bibles looks at the overall Hebrew Bible (known by many Christians as the “old testament”). The ancient writings of the Hebrew people are commonly divided into three sections: the Torah (sometimes called the Pentateuch); the Prophets; and the Wisdom Literature.

Centered in many ways on the book of Exodus (indeed, its authorship is traditionally attributed to Moses), the Torah is the central foundation of the Hebrew people as it combines sacred narrative and sacred law. The Prophets, divided into sections of former prophets and latter prophets, moves forward in time to tell the history from the time of arrival in the promised land to the Babylonian exile. Finally, the Wisdom Literature effectively “zooms in” from the previous broad cultural histories into individual stories and practical questions about how to live and why.

Exodus 2:1-10 (CEB)
1Now a man from Levi’s household married a Levite woman. 2The woman became pregnant and gave birth to a son. She saw that the baby was healthy and beautiful, so she hid him for three months. 3When she couldn’t hide him any longer, she took a reed basket and sealed it up with black tar. She put the child in the basket and set the basket among the reeds at the riverbank. 4The baby’s older sister stood watch nearby to see what would happen to him.

5Pharaoh’s daughter came down to bathe in the river, while her women servants walked along beside the river. She saw the basket among the reeds, and she sent one of her servants to bring it to her. 6When she opened it, she saw the child. The boy was crying, and she felt sorry for him. She said, “This must be one of the Hebrews’ children.”

7Then the baby’s sister said to Pharaoh’s daughter, “Would you like me to go and find one of the Hebrew women to nurse the child for you?”

Sunday’s message was – again – very academic in nature, full of information on how we can understand and honor the sacred texts collected in the Hebrew Bible. You may recall that the Hebrew bible can be seen in three distinct sections:

With the Pentateuch being the central identifying story of the Hebrew Bible, we explored the Genesis stories from Abraham and Sarah through Joseph’s journey to power in Egypt. Then we recounted the Exodus story and the subsequent Hebrew journey through the desert. Throughout it all, we considered the overarching theme of promise and fulfillment. God entered into Covenant with God’s people, and – in spite of various obstacles – fulfilled God’s promise.

The Exodus story and the Prophets also included strong themes of social justice shown in radical protest of oppressive empire. It is good that we explored issues of social justice on the weekend when we also celebrated the Rev. Dr. Martin Luther King, Jr. Issues of race continue to tarnish the beauty of God’s diverse creation, and Dr. King’s dream has not yet been fully realized.

Previous
The Creation Stories
Next
The Gospels