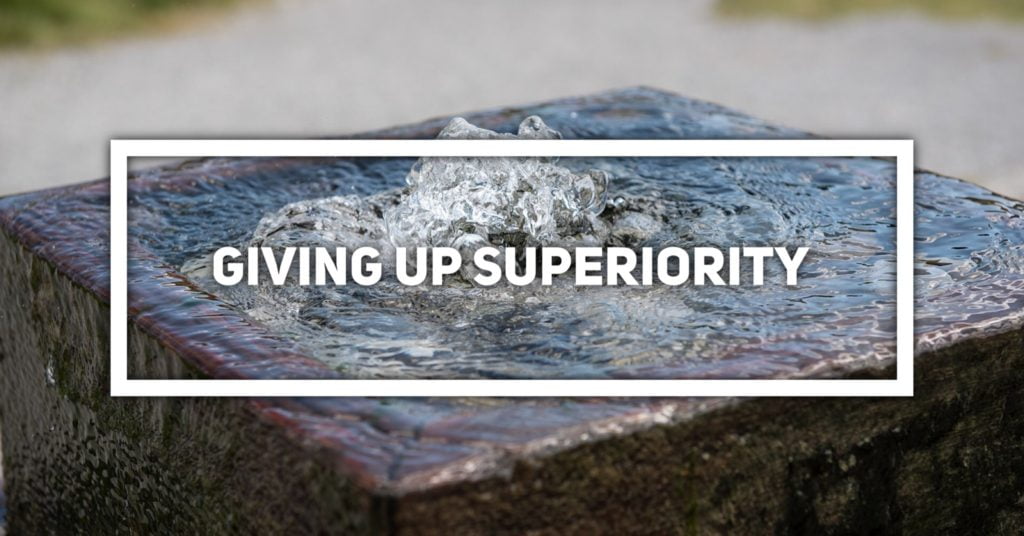 This third Sunday of Lent we continue our sermon series on “Giving It Up.” This series invites us to consider giving up more than just sugar or social media; it asks us to give up particular ways of being in the world. Check out our intro video here:

Last week, Dr. Christopher Carter spoke about the differences between goals and expectations. This week we turn our attention to giving up superiority. In our Gospel lesson, Jesus begins a conversation with a woman that the first-century culture would suggest is unworthy of his attention. Jesus instead interacts with the woman in a way that is shocking to outsiders.

John 4:5-42
5He came to a Samaritan city called Sychar, which was near the land Jacob had given to his son Joseph. 6Jacob’s well was there. Jesus was tired from his journey, so he sat down at the well. It was about noon.

7A Samaritan woman came to the well to draw water. Jesus said to her, “Give me some water to drink.” 8His disciples had gone into the city to buy him some food.

9The Samaritan woman asked, “Why do you, a Jewish man, ask for something to drink from me, a Samaritan woman?” (Jews and Samaritans didn’t associate with each other.)

10Jesus responded, “If you recognized God’s gift and who is saying to you, ‘Give me some water to drink,’ you would be asking him and he would give you living water.”

11The woman said to him, “Sir, you don’t have a bucket and the well is deep. Where would you get this living water? 12You aren’t greater than our father Jacob, are you? He gave this well to us, and he drank from it himself, as did his sons and his livestock.”

15The woman said to him, “Sir, give me this water, so that I will never be thirsty and will never need to come here to draw water!”

16Jesus said to her, “Go, get your husband, and come back here.”

“You are right to say, ‘I don’t have a husband,’” Jesus answered. 18“You’ve had five husbands, and the man you are with now isn’t your husband. You’ve spoken the truth.”

19The woman said, “Sir, I see that you are a prophet. 20Our ancestors worshipped on this mountain, but you and your people say that it is necessary to worship in Jerusalem.”

21Jesus said to her, “Believe me, woman, the time is coming when you and your people will worship the Father neither on this mountain nor in Jerusalem. 22You and your people worship what you don’t know; we worship what we know because salvation is from the Jews. 23But the time is coming—and is here!—when true worshippers will worship in spirit and truth. The Father looks for those who worship him this way. 24God is spirit, and it is necessary to worship God in spirit and truth.”

25The woman said, “I know that the Messiah is coming, the one who is called the Christ. When he comes, he will teach everything to us.”

27Just then, Jesus’ disciples arrived and were shocked that he was talking with a woman. But no one asked, “What do you want?” or “Why are you talking with her?” 28The woman put down her water jar and went into the city. She said to the people, 29“Come and see a man who has told me everything I’ve done! Could this man be the Christ?” 30They left the city and were on their way to see Jesus.

31In the meantime the disciples spoke to Jesus, saying, “Rabbi, eat.”

32Jesus said to them, “I have food to eat that you don’t know about.”

33The disciples asked each other, “Has someone brought him food?”

34Jesus said to them, “I am fed by doing the will of the one who sent me and by completing his work. 35Don’t you have a saying, ‘Four more months and then it’s time for harvest’? Look, I tell you: open your eyes and notice that the fields are already ripe for the harvest. 36Those who harvest are receiving their pay and gathering fruit for eternal life so that those who sow and those who harvest can celebrate together. 37This is a true saying, that one sows and another harvests. 38I have sent you to harvest what you didn’t work hard for; others worked hard, and you will share in their hard work.”

39Many Samaritans in that city believed in Jesus because of the woman’s word when she testified, “He told me everything I’ve ever done.” 40So when the Samaritans came to Jesus, they asked him to stay with them, and he stayed there two days. 41Many more believed because of his word, 42and they said to the woman, “We no longer believe because of what you said, for we have heard for ourselves and know that this one is truly the savior of the world.”

Today’s sermon was the third in our series “Giving It Up,” which focuses on the Lenten theme of giving up something that we feel has control over our lives as a means of discipline, in order to encourage us to practice a more disciplined faith in our journey with God. The two weeks we have focused on giving up control and expectations, and this Sunday Pastor Bob spoke about the importance of giving up superiority, or rather, our desire to be or feel superior.

As Vicki reminded us in her reflection upon her faith journey and her experience of racial segregation, the history of our country shows us that for people of privilege giving up their superiority, or privilege, is always challenging. Rev. Dr. Martin Luther King Jr. echoed her thoughts. In his “Letter from Birmingham Jail” King wrote that “history is the long and tragic story of the fact that privileged groups seldom give up their privileges voluntarily…We know through painful experience that freedom is never voluntarily given by the oppressor; it must be demanded by the oppressed.”

This makes Jesus’ encounter with the Samaritan Woman all the more impressive! Jesus, while not personally an oppressor, was a part of the Jewish community who looked down upon the Samaritans as a lower caste of people. And yet Jesus chooses to engage this Woman; as Pastor Bob noted, He chooses to empty himself of his privilege and have an authentic relational encounter with someone whom society designated as an “other.” Jesus’ actions are indeed a challenge put forth for many of us to follow. As Pastor Bob reminded us, we worship a God that we do not have to approach, but a God whom though God’s love and grace approaches us. The humility of our Creator and our Redeemer is something to aspire to.

And yet, for some of us, perhaps the act of humility has been a tool used by those in privilege to silence us. I see this in the life of the Samaritan Woman. Pastor Bob began his sermon by explaining the difference between superiority and excellence; we are called to give up our desire to be better than, not our desire to excel. In this way, I think that for Jesus and for many people who find themselves in a position of privilege, the way we practice excellence is to humble ourselves and realize that in the eyes of God we are all God’s children. But for the Woman and for those who have been silenced due to their lack of privilege, practicing excellence will need to be different. The Samaritan Woman doesn’t need to give up her desire to be superior over others, because quite frankly, that desire would not have even crossed her mind as a possibility! Rather, the Samaritan Woman, by listening to Jesus and remembering that she too is a child of God, is seeking to excel in way she lives her life. Indeed, by giving up the ideology of privilege that has limited her ability to see herself as a full human being, as a Child of God, she is seeking to excel and reclaim her life. And in so doing she has the courage and conviction to transform her community by inviting Christ to dwell among them.