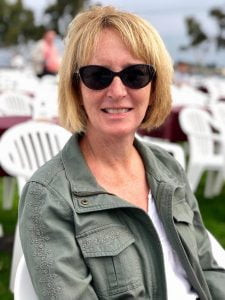 When Rev. Lori Leopold learned in April of 2020 that she was soon to be appointed to Pacific Beach United Methodist Church, she was overjoyed to be joining an active, diverse, compassionate and loving faith community. Lori LOVES stories and looks forward to learning about and sharing in yours.

Pastor Lori was born in Pittsburgh, Pennsylvania and grew up in La Jolla, California. As a youth, Lori was actively involved in the La Jolla United Methodist Church where she first experienced the love and grace of a faith community as well as inklings of a call to ministry. After graduating from La Jolla High School, Lori attended the University of California at Davis where she earned a BA in English. While at UC Davis, Lori studied world religions and discovered an appreciation for diverse expressions of spirituality and a deeper interest in the study of Christianity.

Wanting a change of scenery and a new experience, Lori attended seminary at Candler School of Theology (Emory University) in Atlanta, Georgia. The academic dimensions of seminary captured Lori’s mind but the experiential components of seminary captured Lori’s heart. Lori’s first clinical assignment in seminary was at a state psychiatric hospital, offering support to individuals who were temporarily in an Intake/Assessment Unit. These early days of being present to the deep suffering and profound hope of another human being shaped the future of Lori’s ministry for many years to come. Following seminary, Lori stayed in Atlanta to pursue chaplaincy training, participating in a two year Clinical Pastoral Education Program through the Emory University Hospital System.

Upon returning to Southern California in 1996, Lori was ordained a deacon and appointed to Garden Grove United Methodist Church as an associate pastor. In Garden Grove, Lori especially enjoyed ministry with youth and their families. Lori loved the experience of preaching regularly and learning from a gifted group of clergy and laity who crafted meaningful worship experiences. After two years of serving with the wonderful people and staff of GGUMC, Lori was appointed as Lead Pastor at San Luis Rey Valley United Methodist Church. Lori developed a strong commitment to inter-generational ministry and delighted in the opportunity to walk with others through the ups and downs, the joys and sorrows of life’s journey. While at SLRVUMC, Lori was ordained an elder. She was blessed to spend six years with this loving and dynamic congregation before feeling the tug to return to specialized ministry.

Lori spent the next sixteen years serving as a hospice chaplain with San Diego Hospice, Scripps Hospice and The Elizabeth Hospice. Deeply honored to journey with individuals and their loved ones during tender, precious days, Lori learned an immense amount about pastoral/spiritual care but, more importantly, Lori grew in her understanding of and appreciation for all that is precious about life.

Since her early days at LJUMC, Lori’s strongest Christian commitments have been to those who are marginalized, to those who feel unseen or unheard, to those who suffer in body, heart or spirit and to those who feel as if they don’t belong. As the United Methodist Church has continued to struggle in these last years to find its way to full inclusion for LGBTQIA+ folx, Lori struggled with how to be in relationship with the denomination. Led by the Spirit, Lori discerned that the time had come to return to ministry in a local church setting. Lori was appointed to the Pacific Beach United Methodist Church as of 7/1/20 and is thrilled to be a part of a faith community that lives its faith through love, inclusion and service each and every day.

A few other notes about Pastor Lori…she has two beloved dogs, Sammy and Abby. Lori enjoys cooking and reading. Lori will have a resident pair of tennis shoes in the office and plans to walk regularly in the neighborhood. She hopes you’ll stop by and join her! She hopes you’ll tell her a tale or two or three about you!