I recently had the opportunity to meet our newest piano player Judy B. I told her I was sure she knew our music ministries director Ron Jessee before becoming our pianist. She agreed telling me, “Ron was my Master Teacher back in the late 70’s at Spring Valley Junior High. He actually invited me to sing with the choir this past March when the Organ Guild was having a meeting at PB UMC. Then, he asked me to sing for Easter, and whenever he needs someone to fill, he called me. Then, when a pianist moved out of town, he asked if I was interested, and I took the opportunity.”

I asked her if playing the piano in our church had been what she expected. She told me, “I grew up playing in church, and it is one of my greatest joys. Ron and I used to play together at another church back in ’79-’80. Now, I have to work harder than I have previously, because I haven’t accompanied in a while. But I love it.”

When I asked her about her musical history, she told me, “I grew up in a very musical family – both of my parents sang professionally, and I grew up hearing them sing in church every Sunday. In addition, my mother was the Music Director, and my Dad played the violin. My first solo was at church when I was 3, and I continued to sing at church and school. I began singing professionally at the age of 15, singing for weddings and funerals. I had 2 amazing Middle and High School teachers who nurtured my love of music and the gift that God had given me and introduced me to Classical music. My senior year of High School, God called me to be a Music teacher. I graduated from Point Loma Nazarene University, with a degree in Music Education, with an emphasis in Voice.”

She told me she first learned to play the piano and read music when she was in kindergarten. “Of course, I hated to practice, and my parents didn’t want to force me into music, so I stopped taking lessons. However, I would come home from Sunday school and play songs by ear, eventually learning to play with both hands. In 7th grade our pastor’s wife, who was a phenomenal musician, took me under her wing and taught me chord structure. She saw something in me and nurtured that gift. When they moved on to another church a year later, I was in 8th grade and became the church pianist until they could find a college student to play regularly. God kept putting me in places that would stretch me as a pianist, because He had a plan for me. Little did I know that I would be teaching most of my choirs from the piano.”

I asked her what where else she shared her musical talent. “I lead Hymn Sings on a quarterly basis at my own church, Mission Church of the Nazarene. Also, I musically direct Youth Musical Theater, and teach Voice privately.”

I asked her if there was something special music means to her? She answered, “It is so much a part of who I am. It brings me such joy, whether I’m singing, playing, or directing. It was one of the greatest sources of healing in a very difficult time in my life. God speaks to me and through me using music.”

I asked what brought her to San Diego. “I grew up in Burbank and came to San Diego in 1973 to attend Point Loma College. Once I was here, I didn’t want to leave. I student-taught with Ron and was hired a year later at Christian High/Junior School. That began my teaching career. I have taught Music in Kindergarten through College.”

When I asked her what she does for a living, she told me. “For my day job, I work as an Accountant for a Cyber Security company, and for fun, I direct Musical Theater with Scripps Theatre Arts.” 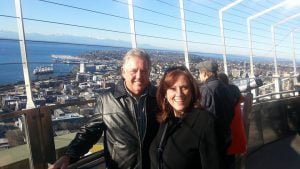 I asked if she had something else to share with us and she told me, “I am married to a great guy, Wes, and have two beautiful grown daughters, who have given us 3 energetic grandsons.”

At the end of our conversation Judy shared with me, “If the Lord opens a door for me to minister in music, I will be there.”

Previous
Video Announcements for March 08, 2020
Next
Responding to COVID-19