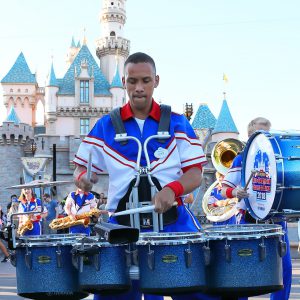 Our percussionist Aram Thaggard led our Second Sunday Concert in February. After the concert, I wanted to get to know Aram. So, we got together a week later. It was a really fun get together and I hope you enjoy getting to know him, too!!!

I asked him how long he had been the PB UMC percussionist and how that happened. He told me, “I’ve been coming to PB UMC since June 2017 and started right off as a percussionist. Steve was the percussionist then, but left for college. Ron asked if I could fill in for Steve all summer. In the fall, Steve came back and Ron asked the two of us to alternate months so we both could continue. So, for about 6 months I was here every other month. After a while both of us came every Sunday, with Steve on bass and me on drums. This continued until May of last year, when I joined the All American College Band.”

“I graduated from San Diego State in May last year with a degree in Music with a focus in Jazz Studies. I am currently writing music I plan to use to apply for a masters degree program at USC. In about a year, I hope to have this completed to prove to them that they can pay for me to go there. I hope my music says, ‘If you pay me to go here, you aren’t going to regret it.’”

Aram told me about his participation this summer in the All American College Band for Disney. “I played a quad tenner cluster of 5 drums, which weighed 65 pounds. I almost was unable to start because I nearly broke my back before we started. After a week I was strong enough. I carried those drums around dancing about 25 minutes in 5 sets a day. We performed in various areas of the park. It was best.”

He told me he started playing the drums in 2005 when he was 9 years old. He did noddle around on a piano and a bass, but the drums are really his only musical instrument.

When I asked if he had a job, he told me, “I have a full time job in finance in Orange county. I go there because they pay me enough to drive there. But, my goal is to be a musician. I am about to join the San Diego Gay Men’s Chorus. I am not personally gay myself, but know several guys in the chorus.”

I asked him if he had anything else to share with us. He told me, “All I want to say is the greatest thing you can ever for any artist is encourage them. You don’t have pay them. This church has been so encouraging to me. It is so much easier to play for people who want to hear you. It makes it so easier to come here and it means a lot to me.”

After last Sunday’s service, I went back into the sanctuary and noticed Aram was giving drum lessons to a young boy. The boy is Jesse and Joe’s. Aram was doing an outstanding job teaching him and he was catching on very well.