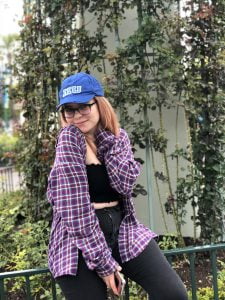 Jayna told me, she applied for the Wesley Foundation intern position in early August. “In my application, I detailed the project I would do as an intern. I was accepted and assigned to PB UMC because the project I proposed would work best here.”

Her project is centered on bringing in a new audience into our folds and to increase our understanding of others. “It includes conducting interviews of those who have felt hurt by religion because of their differences, like I once did. I want to know how they found a home at PB UMC and how it has helped them accepting their differences. I am excited about the internship and getting to know more about these folks and, hopefully, getting them more involved in our church.”

Some time ago, Jayna told the congregation about her sexual orientation. She expanded on the subject to me, “When I was younger, I struggled to accept religion and God in my life, because I’m not straight; I am pansexual. I got more involved in the church when I finally learned that I could accept myself as I am and still believe in a higher power.” When I asked her what pansexual meant, she told me, “To me it means that I love someone regardless of their gender. It’s more about their heart.” A few months ago, Jayna started bringing her boyfriend Luke with her to church. They are obviously a very loving couple. Jayna told me Luke is special and his gender has nothing to do with their relationship.

Jayna lives at home with her family and is attending Mesa Community working towards a degree in psychology. “I plan on transferring in 2020 to either University of Arizona or Chapman University (in Orange county) to pursue a career as a therapist.”

I told Jayna I learned from her mom, she learned to play the guitar several years ago. I asked if she played other instruments now. “Not really. I play the guitar on and off, but not near as often I should.” Oh boy, do I ever understand that.

Previous
Amazed, Astounded and Astonished
Next
Mary, Full of Grace