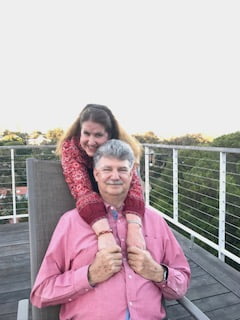 I recently had a fun conversation with one of our Sound Techies, Bruce T., and his wife Sheryl.

When I asked them how long they’ve been coming to PB UMC, Bruce told me “12 years. My wife and daughter had been church shopping because we felt like we needed a new church. One day they just wandered into PB UMC. They liked it and we all went the next Sunday. The first thing that hit me was the music. It was (and is) totally amazing.”

It turns out Bruce knew Pastor April as a Soccer Mom. They were both were team managers of their kids’ soccer teams. “Team manager was a big job. We managed both attendance and finance.”

I asked Bruce how he became one of our Sound Techies? He told me, I was approached by another member of the church, Craig R. I know Craig because he and I both work at General Atomics. He asked me if I’d consider taking on a role in support of the church. I told him I’d be interested in tech stuff, and was soon learning sound with Joe P.”

When I asked him if he enjoyed the task and does it require any special talent of his, he told me, “Even though I am sortta a techie guy, this is all new to me. I never ran a sound board before. I knew what a sound board was and how it worked. I just did not how to use it.” He told me it wasn’t that hard and he now totally loves running sound, because it’s great contributing to the service, especially the music portion.

Bruce and Sheryl told me they’ve been married for 31 years, but have been together even longer. About 43 years. They have 2 children: a 27 year old daughter in graduate school at CalTech studying astrophysics and currently in Europe making a scientific presentation to the European planetary science body; and a 21 year old son, a senior at University of Arizona.

I asked Sheryl what she does for a living. She told me, “I am an HR manager at a retail store. I’ve been in retail all my adult life. I started working at Montgomery Ward at age 16 and have worked in big box stores ever since, including Target and Macys, as well as IKEA, where I’ve been for 15 years.”

When I asked if there was anything else they wanted to share with us, Bruce and Sheryl told me there are both interested in working towards getting more members for PB UMC and have some ideas on how to do that. Bruce is putting a focus on improving the Live Stream of our service. Sheryl is interested in improving the attractiveness of our church services to potential new members.

Also, Sheryl shared with me that they both love music. “We met in college because of our musical interest. We were both in the University of Arizona (same college their son is attending now) marching band.” The three of enjoyed sharing stories about being in marching bands (I was in the marching band in high school). I also really enjoyed getting to know the Bruce and Sheryl and hope you do, too.

Previous
Video Announcements for November 25, 2018
Next
Beginning with the End