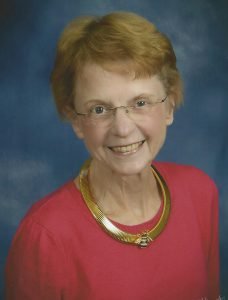 This issue of the Beach Breeze is the 25th edition produced by our Newsletter Editor TennieBee. I thought that meant it was time to get to know her. One fun thing I learned was that both her maiden and married last names are the same!

When I asked her how she became a member of Pacific Beach United Methodist Church, she told me that she and her husband Bob transferred membership from Park Boulevard United Methodist Church to PB UMC in 1975. “I took a community college cooking class and met Carol H., Al’s wife. She kept encouraging us to move our membership to PB, and finally, when the Park Blvd pastor retired, we transferred.”

TennieBee has been an active Methodist since she was 12. “I was born into a family that was Methodist. I sang with the chancel (adult) choir from age 12, and even dated the pastor’s son when I was in high school. We had a very active Methodist Youth Fellowship, and some members still stay in touch today. In college, I was involved with the Wesley Foundation. As an adult, I’ve served on several committees in each church where I’ve been a member.”

A native Californian, she got her degree in Education (with minors in Music and English) from Fresno State College. She taught 6th grade full-time in Edison, CA. While her husband, Bob, got his PhD at UC Berkeley, she was a substitute Special Ed teacher in grades 7-9 in the Berkeley area.

TennieBee and Bob have known each other since their parents became good friends right about the time TennieBee was born. “Though our families celebrated many holidays and other occasions together, Bob and I didn’t date until I was teaching and he was in the Doctoral program. We’ve been married 53 years.”

I asked her what qualified her to be our newsletter editor. From what she told me, I think she is more than qualified. She told me, “Early on, I learned the difference between editing for business/scholarly publications and those produced through the efforts of volunteer authors. The following are examples of my editing positions:

TennieBee has been a very active volunteer since she and Bob moved to San Diego. Here are just a few examples:

We are obviously very lucky to have her as our newsletter editor. She has done a great job with her first 25 editions and we hope she will continue to do so.

Previous
Build Up
Next
Does It Matter?