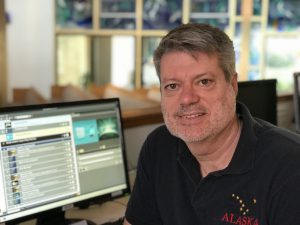 I recently had a fun conversation with one of our back of the church techies, Projectionists Coordinator Craig Roberts. When I asked him how long he’d been a member and how he found out about PB UMC, he told me, “I’ve been coming to PB UMC for 21 years. Four different things pointed me to this church over course of 4 years:

Craig has a BS from Oklahoma State and a MS from San Diego State in Electrical and Computer Engineering and now works as a software quality engineer for General Atomics.

When I asked him about his projectionist team he told me, “I’ve been organizing the projectionist team for about 4 years. The work involves usually just pressing a button during the service. It isn’t quite as easy as it sounds. Sometimes, we need to go back to a previous slide and other times we need to make changes to the slides prepared by the church office. For instance, sometimes misspelled words sneak into the slides.”

“My team is made up of 10 talented members. A lot of people are intimidated by technology. So, the ideal person for projection team is someone who comes to church by themselves and cannot be intimidated by computers. It is a great way for younger members to volunteer for church work. Everyone has messed up (including me) the job at least once, but after that they have earned their ‘stripes.’ If the projectionist is doing the job right, no one will even think about them. When they go unnoticed, that means things are going real well.”

I asked Craig if he had anything else to share with us. He had a couple of interesting topics.

“For years I have loved Pop music and feel I have an encyclopedia-like knowledge of it. I started writing a column called Sound Advice for the Gay & Lesbian Times, in which I reviewed Pop music CDs and concerts. It was a great experience. I even got to meet celebrities.”

“In 2011, I was chair of National Chair of Stonewall Democrats, an organization of LGBT democrats across the country and got invited to a white house reception celebrating LGBT Pride Month. I took Miss Black Louisiana 1937, Verna King with me. She was not a lesbian, but had a love of people, regardless of whether they were black, white, gay, or straight. She reached across barriers that people set up for themselves. The youngest and oldest attendees were selected to get their photo taken with President Obama. I helped wheel chair bound Vera, the oldest attendee, to the special room set up for the photographs. I tried to get her out of her wheel chair so she could pose with the president, but was doing it completely wrong. So, he came around to help me. He said I was doing a good deed, and he shook my hand. What a thrill! I shook hands with the President of the US after he helped me do a simple task.”

I enjoyed getting to know Craig this month and Joe last month.  For the next several months, I will get to know their team members and share that information with you.  Hope you enjoy it as much as I do.