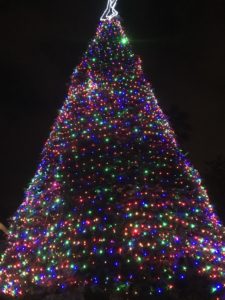 Our large evergreen tree was originally planted in the northwest corner of the courtyard. It was moved to its current location for more room to grow and to become a central symbol. For many years coffee was served on the east side of the tree, using actual cups and saucers. Candle light services were held around it on Christmas Eves with a nativity scene as the focal point.

Sometime in the 1990s, Andy H-S strung a power cord from the top of the administrative building to the tree, and decorated the tree with strings of big bulbs for the holiday season. Years later, white incandescent bulb nets were used. For many years we rented a tall ladder from Ace Hardware Rental until they went out of business. We then purchased a 40 foot (heavy) fiberglass ladder which is stored on the north side of the admin building.

A cherry picker has been considered, and would be quite useful for the top third of the nets. The big ladder is difficult to maneuver. It has been used a lot this past year when a number of the nets, or fuses therein, had to be replaced.

Ron and Louis initiated a switch to LED multicolor nets. We have used a number of different stars at the top of the tree. The star is on a pole which is inserted in a PVC pipe tied to the top of the tree (and left there). The tree has become a Pacific Beach Christmas symbol and attracts a number of sight seers. We have enjoyed many Christmas Eve candle light services around the tree.

Many people have participated in putting up the lights and taking them down. Dick V.S. has been the chief honcho for years, but now says it is time for someone else (much younger) to become the coordinator. Kevin McG. was a chief assistant. Most recently, Art M. has been a key player, following in Tracy Starr’s footprints.

A new coordinator is needed. Dick V.S. will be available as a consultant. Contact the Church office if this is a job for you.