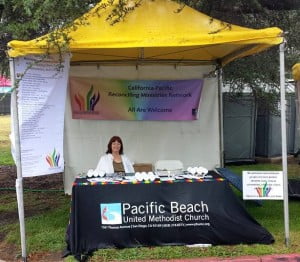 This year is the first year that PB UMC participated at the Pride Festival and hosted a welcoming booth. Despite the downpour of rain (which also resulted in beautiful rainbows for the weekend),
our enthusiastic team of volunteers included Pastor Bob, his wife Beth and children Zach, and Cameron,
Bruce, Adam, Al, Mark, Marcia, Malea, Rick, Scott, Hope, and Steve.

Through the efforts of our amazing volunteers, many people witnessed the welcoming and loving nature of PB UMC. Pastor Bob spoke about both the Festival Booth and the Parade Float during his sermon on Pride weekend. As people saw the float going by, they yelled, “Thank you so much for being here!” as they recognized that a church was participating in the Pride Parade.

Similarly, I have both personally witnessed and heard from booth attendants that many festival goers came up to our booth and asked questions about faith, our history, even theology. One particular person came up to our booth and commented, “Wow! There are churches that are open to us, and do not judge who we are?” To which I replied, “Of course!”

Let’s continue to show that God’s love is for everybody, and strive to be living testaments of this truth anywhere we go in this world. We look forward to Pride 2016!