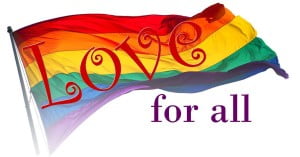 On October 10, 2015, Pacific Beach UMC will join with United Methodist Churches and organizations in a celebration of Marriage Equality.

The United Methodist Church (UMC), the largest mainline protestant denomination in the country, remains torn on the subject of same-sex marriage. Church law bans clergy from performing same-sex marriages and forbids churches from hosting such ceremonies. Despite these prohibitions, a growing number of UMC clergy members have voiced their support, even before a Supreme Court ruling this summer made it legal in the United States.

As an act of visible support for LGBTQ couples, on October 10, 2015, UMC clergy across the state will gather at four different UMC congregations to celebrate the sanctity of all marriages in The United Methodist Church.

Also sponsored by Methodist Federation for Social Action (MFSA) and The Reconciling Ministries Network (RMN), this celebration is an important response to those who believe that the loudest voices in The United Methodist Church are anti-gay or are trying to “defrock” clergy.

The Oct. 10 ceremony is a way the people of PB UMC choose to show LGBTQ couples unwavering love and support. We unequivocally believe in marriage equality and we honor  covenantal commitments between two persons regardless of gender identity or expression.

People are invited to gather starting at 11am, and ceremonies will begin at 12pm. There will be opportunities for food and fellowship after the ceremonies here at Pacific Beach UMC and at the different locations. The participating churches include:

More information and (free!) tickets can be found at http://calpacloveforall.eventbrite.com.